We owe the late Maronite priest, Michael Casiri, for being the first to mention this book and the author in the bibliography he wrote upon commission from the Spanish authorities to document whatever books were left from the Arabic manuscript after the devastating fire that destroyed most of the estimated ten thousand books in the Escorial library in 1671. It was estimated that less than two thousand manuscripts were saved with major or minor damage, this manuscript being one of them under # 835 (1).

It is of utmost importance to differentiate between the author of this manuscript, who was a physician and oculist, and another scholar with the same last name but a different first name, who is known to be a botanist and druggist. His name was Abu Jaafar Ahmad Ibn Muhammad ibn Ahmad ibn Al-Sayed Al-Ghafiqi.

After Casiri, the book was mentioned by Wustenfeldin 1840 (2), and then by  LucienLeClerk in 1876 (3). The famous ophthalmic historian and biographer Julius Hirschberg in collaboration with the orientalists J.Lippert    and    E.    Mittwoch examined the        Escorial manuscript and mentioned it briefly as a book called The Guide to Ophthalmology # 835. (4). Max Meyerhof studied this book carefully and translated several pages (365-406) into French (5) and stated that Pansier wrote about it in 1903(6). Most recently in 1977 Dr. Hasan Ali Hasan studied the book and submitted his study as a thesis to obtain the Medical Degree from the University of Madrid (7).

It is surprising that neither the book nor the author were mentioned by the famous biographer, Ibn Abi Usaybiaa, or the more modern biographers like Al-Zirkly or Kahhaleh. The only modern biographer to write a very brief caption was the late prof. Kamal Al-Samarrai(8). There was some controversy about his  year  of death;some historians   claimed that   he   died   in   560AH (1165CE), but I disputed this claim from a statement in the book that in 595AH (1198CE), he witnessed the death of several people after eating a meal made of some kind of wild mushroom, and this should solve the controversy.

The author’s last name indicates that he was born in Ghafiq, which vanished and was replaced by a town called De Quijo near Cordoba according to the orientalist Prof. Miguel Asin Palacios.

As mentioned above, the Escorial manuscript # 835 is the only known original and complete manuscript, it is made of 594 pages and written on the first page in Arabic and French that it was written in Malaga 991AH (1583CE) in Maghribi calligraphy. Unfortunately, the first and last pages are missing in addition to that a few pages were damaged from the water used put out the fire. 1 (MZW) requested to see the manuscript during my visit to the Escorial library in 1987 but was denied (Fig.2 and Fig.3).

The second bears # 3319, contains the name of the book and its author, but it is incomplete (only 462 pages), and the copier wrote that he copied it from manuscript #1808. This valuable book consists of six chapters, each one of them focuses on specific subject such as anatomy, physiology, environment, unnatural factors affecting the eyes (diseases, wounds etc.) The fifth chapter was mainly to classify the eye diseases and their treatments (powders, ointments etc.) One chapter was dedicated to the compounded prescriptions.

This book is considered a complete collection of most of what was written prior to the author’s time; he quoted twenty-three scholars (Grecians, Arabs and Muslims) and mentioned fifteen books and dogmas he used as references. What is amazing about this book is that the author listed five hundred simple medications from the mineral, animal and botanic kingdoms, in addition to sixty-nine compounded prescriptions which he modified some of their components.

This book, although it lacks any anatomical or surgical instrument illustrations, or optical theories or tables to classify the eye diseases, is still a valuable one, for it quotes twenty-three scholars, and lists five hundred simple medications and sixty-nine compounded prescriptions to treat all kinds of eye diseases. As for his surgical experiences and skills, we did not feel that he was a skilful and reliable surgeon. 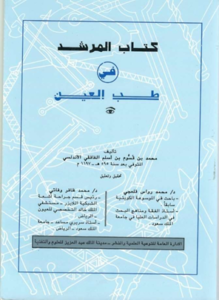 Fig 1: The cover of the edited book 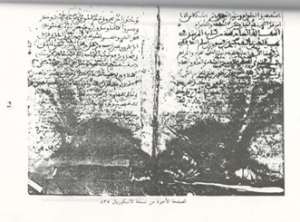 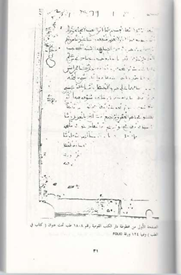 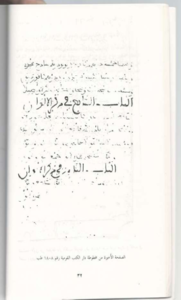