Overview of the Health System in Jerusalem during the Ottoman Rule

Medicine and surgery were always present in Palestine since the ancient times, in the Pre-Islamic era , Hyrcanus I (from the Maccabean Hasmonean period 104-175 BC) founded what looks like a hospital in the city of Jerusalem. (1)In the Islamic era (638- 1917 AD), the medical sector in Palestine flourished, and many hospitals and Bimaristans were established which shows how crucial healthcare was to the Muslim ideal. Other examples of Islamic rule’s positive impact on the health sector in Palestine include the Umayyad era; perhaps the most famous person who worked in medicine was named Khalid bin Yazid bin Muawiya who was known for lecturing in the courtyard of the rock in Jerusalem. During the Abbasid era, a number of doctors became famous in the cities of Ramle, Ashkelon and Tiberias , such as Paul bin Hanoun. The Ayyubid era then witnessed the creation and founding of many healthcare facilities such as the Salahi Bimaristan in Jerusalem. During the Mamluk era, interest in the development of the healthcare sector Palestine increased significantly even after the fading of the Crusades (2).  Furthermore, the health care system improved greatly during Ottoman rule in Palestine, and many hospitals were founded like Baladiyah hospital in Jerusalem. This era is characterized by the prosperity of hospitals for foreign missions, especially in the Holy City for example: the Russian Hospital, the Hospice Hospital, the English Hospital and the German hospital (3).

During the Israeli occupation however, the healthcare sector is struggling (as are all sectors) due toalack of resources caused by the Israeli government’s siege and obstructionist policies against the Palestinians (4).

Improvements in the infrastructure of the health system in Palestine during Ottoman rule:

The Ottomans took care of the bimaristans that were established in Palestine during the Islamic era and increased their endowments. Bimaristans are public hospitals where internal, rheumatic, mental diseases are treated, surgical operations are performed and where treatment is carried out by specialized medical staff. Among these bimaristans are the Fatimid bimaristan in the city of Jerusalem, the al-Salahi bimaristan in Acre (Akka city), the al-Mansuri bimaristan in Hebron, the Gaza bimaristan, the Ramlabimaristan and Nablus bimaristan (5).

These bimaristans are still remembered to this day due to their activities and positive impact on the community.

The Ottomans also established new healthcare facilities in Palestine, for example the Baladiyah Municipal Hospital in Jerusalem.This hospital was established in 1891 AD, during the reign of Sultan Abdul Hamid II in Jerusalem. It was a two-story building with 28 rooms and 40 beds. The hospital staff consisted of 13 nurses, and an imam who represents the municipality administration and serves as the hospital secretary. The chief physician was a Greek named Photios Avclides and was assisted by the Jerusalemite physician Kamel al-Husseini. The hospital was provided with an equipped operating room, and a pharmacy that contained all the medicines known at the time. This was considered cutting-edge for the era and meant that patients received the best care possible(1).

Furthermore, a few other specialty hospitals were established in Palestine during this time in response to new epidemics, wars, and new medical science such as the Ophthalmology Hospital (St. John’s hospital 1882 AD) in Jerusalem. Eye diseases were a particular challenge; they usually broke out in early spring, and lasted throughout the summer. It seems that key factors in the prevalence of eye diseases were a combination of unsanitary conditions, primarily the lack of bathing water under crowded living conditions, and a hot and dry climate which encourages the spread of microbes. And while modern pharmacies, clinics, general and professional hospitals spread rapidly in Jerusalem beginning in 1830, it was not until 1882 that the first hospital specializing in eye diseases was founded in Palestine, in Jerusalem. The intricacies of eye diseases meant that treating them was far from straight-forward though the creation of the eye hospital demonstrated how seriously these diseases were taken; and how they required specialist knowledge and research. The founders of the hospital; were members of the Order of St. John and until the official building was completed, the mission was housed in temporary quarters (6).

In this era, medical schools were established in the Islamic world, in which teaching was performed by two methods:

(1) The theoretical method in the medical schools.

(2) The practical method for training and practice where students gathered around the chief doctor to see and examine the patients and the treatments he prescribed.

When the students finished their period of study, they applied for an exam, took an oath and received their certificates. When they started to practice medicine, they always worked under the state’s supervision.  This means of course that bimaristans were institutes for teaching medicine and to complete the study and training for junior doctors; similar to teaching hospitals in the UK today which teach medical students through their supervision of placements.

From a practical point of view, the professors prescribed the treatment for the patients and examined them in the presence of the students. They performed these instructions in an organized way and they ran a follow up for the patients, hence they acquired the necessary practical experience needed for a medical student.

The system also disqualified healthcare workers who were deemed to be unsafe to practice if proven so to protect the public which is similar to how doctors can be struck off if found to be putting a patient at risk.(7)

The executive management of the healthcare facilities in the era of the Ottoman empire was based centrally and was represented by the judge (the mayor) in each country. The judge would recruit local managers to the healthcare facilities who mostly included imams as an administrator and secretary. The local managers were expected to create a financial plan to cover the running cost of the facilities and were funded by the endowment’s money.   The physicians’ union in Jerusalem was established in the 17thcentury too. (8)

Challenges and the end of an era:

Palestinians were subdivided into three major ethnic groups, according to their patterns of life. These posed certain challenges. The categories were as follows: The urbanized (hadar), the peasants (fallahin), and the Bedouin tribes (badu). The degree of reliance on traditional medicine has always varied between these groups. In the period under study, dependence on traditional medicine was greatest amongst the nomadic Bedouin, followed by inhabitants of small rural villages on the periphery, due to both strongly rooted traditional values and the lack of access to any alternative treatment methods. This meant that the Peasants and the Bedouin groups suffered from poor health in general due to diseases and environmental health conditions, a lack of public health education, inadequate hygiene, malnutrition, malarial mosquitoes and other parasites more than the Urbanized group, which lead to the spread of disease and late presentations to the city hospitals.(9)

In the nineteenth century, Palestine, then a part of the Ottoman Empire, was a good place for pathogens. On several levels, circumstances were conducive to illness and disease. The geography did not provide an easy living, comprising a relatively small area with both swamps and deserts and a very high population density in the areas that were inhabited meaning disease could spread rapidly from one person to another. It was on the Islamic pilgrims’ path on their way to and from Mecca that there was such a great risk of contracting disease.

Wars, poverty, backwardness, ignorance of the local elite and the frequent incompetence and indifference of the central government and the resulting lack of effective social administration further prepared the ground for an easy spread of diseases. Thus, the region was frequently struck by epidemics, particularly malaria. Central government and local administrations wouldn’t learn from their mistakes so the same epidemics would continue to strike.

On the other hand, the weakness of the central Ottoman system in general towards the end of the Ottoman rule in Palestine affected the health sector negatively, mainly due to management corruption. As the “Sick Man of Europe” the Ottoman Empire was crumbling in its final decades and in some ways was failing to administer basic government functions.

The demise of the Ottoman Empire at the end of the First World War produced a temporary power vacuum which attracted various groups interested in the area. Several colonial powers strove to extend their spheres of influence, the politically active class of the Arab population expected independence and an international Jewish community hoped to build a national home on the ground of the Jewish state of antiquity.  Such political instability was not ideal for an already struggling healthcare system, and unfortunately, occupied Palestine is still suffering from poor healthcare system to this day. (9)

Photos about the Palestinian Bimaristans during the Ottoman era :

Baladiyah hospital in Jerusalem (Baladi Bimaristan) which was established in 1890 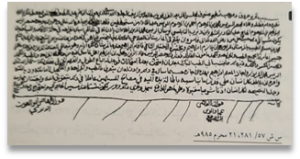 A certificate of Medicine and Surgery license to practice 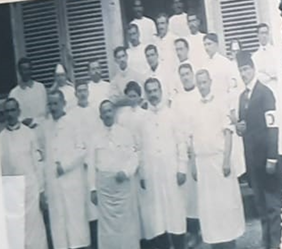 Medical staff in the Baladiyah hospital in Jerusalem 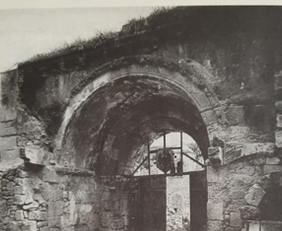 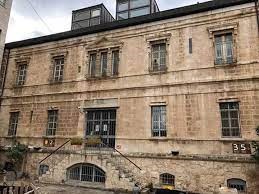 The Ottoman Bimaristan in Jaffa (Yafa) 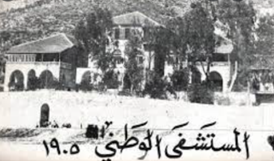