Foods of the Quran and Sunnah, that ensure good nutrition to support the normal functioning of the immune system

The Relationship between food and health including the function of immune system has been known for centuries.

Vital nutrition is present in many foods that play a crucial role in promoting good health and a stronger immune system. Many fruits and vegetables contain rich dietary vitamins, minerals, fibre and large amounts of phytochemicals which are proven to have health benefits. In addition, food plays a crucial role in the management of countless illnesses including bacterial and viral infections and hence they are natural healing treatments. Many of these foods have been used as a means of healing. This has been clearly illustrated in the Islamic teachings and recommendations for health benefits since the time of Prophet Muhammad (PBUH) (1,2). We will be looking at some of these foods that are mentioned in the Quran and Sunnah and shed light on their health benefits.

Dates are staple foods for people in the Middle East and North Africa and other places.

Dates were the most favoured food of Prophet Muhammad (PBUH) who said ‘If anyone is fasting let him break his fast with dates. In case he does not have them, then with water’.

Their health benefits and rich nutritional value are well known across the world due to the presence of rich nutrients and their health-promoting properties. Dates are regarded as one of the richest foods in carbohydrate containing 75-87% of sugar, in addition to proteins, minerals including Zinc,  and vitamins A, B1, B2, B3, B5, B6, B9, B12, C, E. All the vitamins inside dates play an important role in metabolism. These minerals and vitamins do have a calming effect as well.

The minerals play a fundamental role in the formation of some important enzymes needed in most functions of the human body. They also play a very important role in contraction and relaxing of muscles and normalizing the acid base levels in the body. In addition to the vitamins and minerals, dates contain fibre which is regarded as an important element for bowel function and movement, so can act as a natural laxative (3).

The dates have also been mentioned in the Holy Quran in surat Mariam. “And shake the trunk of date-palm towards you, it will let fall fresh ripe-dates upon you”. (Holy Quran 19:25). Due to high level of nutrients, dates would be considered a good food for a new mother. Evidence from trials has shown that consuming dates could help in the ripening of cervix and reducing the need for oxytocin and prostaglandins to induce labour (4).

Figs are regarded as vitamin rich fruit. These fruits contain vitamins B1, B2, C, A and carotene. Figs also contain a high level of nutritional substances that build the cells of the body and make haemoglobin, so they are of benefit to those with anaemia. Due to significant contents of calcium and phosphate, Figs may help in preventing general weakness and improve bone health. According to some experts, these fruits are rich in Vitamin K which helps the balance of blood ability to clot and reduces the risk of bleeding. People who take warfarin or new novel anticoagulants may need to avoid figs.  Antioxidants are also found in figs and play a good role in good general health and wellness. Like dates, Figs contain good amount of fibre that help bowel movements.

It is also believed that drinking fig infused water is beneficial as a natural remedy for respiratory infections, such as bronchitis or throat infections, and may help easing the cough. Dried figs contain nutrients, minerals and vitamins which are essential for the function of our nerves (5). The B6 in these fruits may help our brains to produce neurotransmitters such as serotonin and dopamine which help regulating our mood.

‘There comes fort from their bellies, a drink of varying colour wherein is healing for people. Verily, in this indeed a sig for people who think’ Al-Nahl 16:69 (Holy Quran).

Honey has high levels of monosaccharaides like fructose and glucose which form 70-80% of its nutritional contents. This is a very good source of energy. It also contains antibacterial, antiviral, anti-inflammatory, and antioxidant properties. These, in turn, imbue the honey with great wound-healing properties. Honey is used as a sterilizing substance, applied onto affected wounds and prevents ulcers from developing. It is trialled and tested and available in many Arab countries such as Syria, Egypt and Saudi Arabia (6). It also helps the immune response to infection whereby honey induces the generation of antibodies. The Antioxidants that are contained in it clean up free radicals that are linked to disease including immunological ones. For example, honey contains flavonoids, polyphenolics, Vitamin C, and monophenolics which may be associated with a reduced risk of cardiovascular diseases. Flavonoids as an antioxidant help coronary vasodilatation, reducing the ability of platelets in the blood to clot, and inhibiting low-density lipoproteins from oxidizing. Many investigations showed that certain honey polyphenols have a hopeful pharmacological function in reducing the chance of cardiovascular disorders (needs reference please). Honey also has many minerals such as calcium, phosphate, potassium, and magnesium which are essential for wellness and a healthy immune system.

It was also found to have anti cough properties.  Honey might play a beneficial role in helping treatment for various allergic conditions such as allergy to pollens. This was explained by the desensitisation principle where local honey has small amounts of pollens or allergens. And one treatment for allergies is repeated exposure to small amounts of allergens.

‘And those of the right hand- how fortunate will those be on the right hand? Among thorneless lote trees, and among banana trees with fruits piled one above another, And in shade long extended’ Surah Al-Waqi’aah (Holy Quran).

These verses are reminders to us that bananas will be amongst the fruits of paradise. Bananas contain carbohydrates which give the body heat and energy. These fruits also contain a good level of vitamin C which treats and prevents diseases like scurvy and help fighting infections such as flu. In addition to Vitamin C, bananas contain several types of potent antioxidant which are linked to the reduction of the risk of heart disease and degenerative illnesses. They also contain many B vitamins, such as B1, B2, B6 and B12. These vitamins are important for the function of the nerves and reduce nerves inflammation. Vitamin B in general is good for production of haemoglobins and reducing risk of anaemia. Bananas are well known for having high level of potassium (358mg per 100g), but they are low in sodium and free of cholesterol, hence they may help to lower high blood pressure, to reduce the burden on the kidneys and to protect against atherosclerosis (5).

‘Allah is the Light of the heavens and the earth. The example of His light is like a niche within which is a lamp, the lamp is within glass, the glass as if it were a pearly [white] star lit from [the oil of] a blessed olive tree, neither of the east nor of the west, whose oil would almost glow even if untouched by fire. Light upon light. Allah guides to His light whom He wills. And Allah presents examples for the people, and Allah is Knowing of all things’. Al-Nour 24:35 (Holy Quran).

This shows the blessing from the tree and the oil, but many are unaware that olive oil is a gift for mankind. Olive oil is rich in monounsaturated oleic acid which has strong anti-inflammatory effect and may have beneficial effects on genes linked to cancer.  Due to anti-inflammatory effects and high levels of antioxidants, olive oil does help in reducing the incidence of cardiovascular disease, strokes and Alzheimer’s. It also complements treatment of chronic inflammatory diseases such as Rheumatoid Arthritis. It also has antimicrobial effects due to nutrients that inhibit or kills harmful bacteria such as Helicobacter Pylori that lives in the stomach and is responsible for peptic ulcers and gastric cancer (7).

It was narrated that Khalid Ibn Sa’d said: We went out and Ghalib Ibn Jabir was with us. He fell sick on the way, and we came to Madinah while he was still sick. Ibn Abi Atee visited him and said to us. ‘You should use this black seed, take five or seven seeds and crush them and then drop them into the nose with a few drops of oil, on this side and on this side, because I heard A’isha may Allah be pleased with her tell me that she heard the prophet, blessing and peace of Allah be upon him say: ‘this black seed is a healing of all diseases except Al-Sam. I said what is Al-Sam, he said death’’. (narrated by Al Bukhari).

It is proven that that black seeds and their active constituent TQ (thymoquinone) have useful effects in treating chronic inflammatory and auto-immune diseases (8). This effect is due to antioxidant properties that black seeds have. Black seed oil has shown good results in treating asthma and hypertension as well. The oil derived from black seeds was found to have anti cancerous effects such as skin and pancreatic cancers. However, it should not be used as an alternative to conventional cancer treatments. It was also used to reduce the tissue damage from radiation therapy. Black seed oil was used for other inflammatory skin conditions such as acne and psoriasis in addition to its use in skin care products. Historically, Ibn Sina (Avicenna) prescribed black seed for the treatment of headaches and migraines. He noted that black seed should be crushed and mixed with honey and hot water, to treat and destroy kidney stones and help the flow of urine. Heating the seeds can cause them to lose their essential oil, and thereby lose a great deal of their medicinal properties. Eating them in their natural state without crushing may reduce the chance of benefiting from them, because if they are not chewed well and enter the body as a whole they will pass through the digestive system.

In summary, the relationship between food and health is well established in Islamic medical literature. Evidence based medicine has proved a great deal of this connection. It’s vital to maintain a healthy balanced diet in order to have a healthy wellbeing and strong functioning immune system. The British Dietetic Association do not recommend any one food over another, but instead recommend eating a variety of foods and following the Eat Well Guide, to maintain a health balanced diet (9). 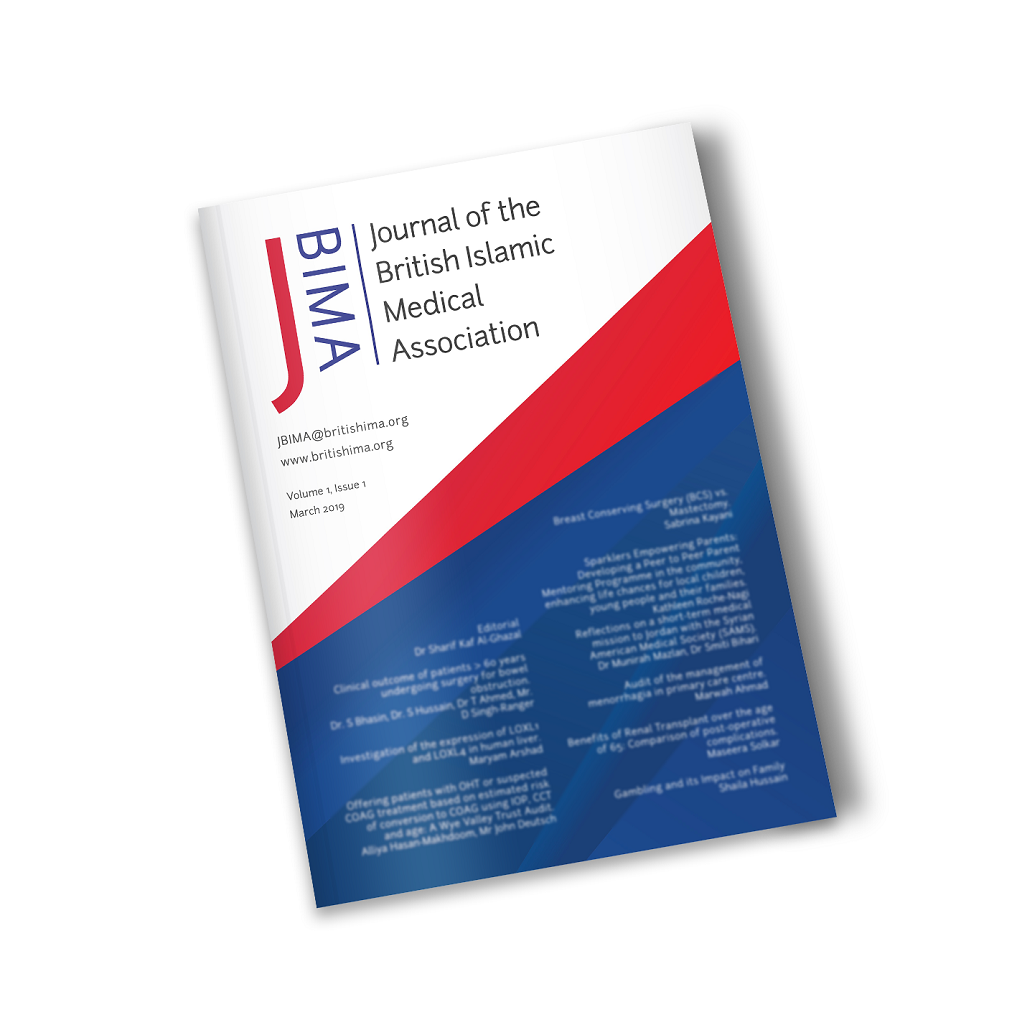