Anatomy of the Eye, Its Shape and the Treatment of its Diseases By Ali Ibn Ibrahim ibn Bakhtyashu Al-Kafartabi

The first historian to bring the book and its author to the ophthalmological community was the late ophthalmologist, historian, researcher and Orientalist professor Max Meyerhof in the introduction to a book he edited, translated into English, and published in Cairo, Egypt in 1928[1].  Prior to that, in 1927, he translated parts of the book into German[2] .

The book and its author were not given any attention by biographers such as Usaibia’a and Al-Zirkly, perhaps because he was born and raised in a very small town called Kafartab, located between Aleppo and Maarat Al-Nu’Aman northwest of Syria, or maybe because he travelled extensively to Egypt and Yemen as mentioned in the book.  The reason may also be because he did not limit his practice to the management of eye diseases.

The author did not have official training under any renowned oculist or ophthalmologist, but he mentioned several times in the text that he read several compounded prescriptions from his father, and he observed his father using some ointments to treat certain eye diseases. Besides that, he mentioned throughout the book that his father was a skillful physician and oculist, and that could be the reason he did not gain a reputation or fame in that field.

The author is a descendant of a very prominent and reputable family of Assyrian physicians who originally trained in what may be the very first medical training facility of its time, named Jundisabur,in the southwestern part of Persia.

The first famous physician in the author’s family was Jorjis Ibn Bakhtyashu (D 155AH=772CE), who headed the Bimarstan in Jundisabur until he was summoned by the Khalif Al-Mansour in Baghdad to be his private physician.

Then came his son Bakhtuashu Ibn Jorjis to serve as Khalif Haroon Al-Rasheed’s private physician until his death (184AH=800 CE). He had two sons who were very prominent and skillful physicians, and all served in the courts of the Abbasid khalifs.

Gibrail ibn Bakhtyashu ibn Jorjis (D213AH= 828 CE)served Khalif Haroon Al-Rasheed. Yuhanna Ibn Bakhtyashu Ibn Jorjis (D290AH= 903 CE) who was a great translator from Greek and Syriac languages into Arabic.  Then came their sons who inherited the trade and gained the skill and the reputation of their ancestors.

His ancestry can be traced to very reputable private physicians of several Khalifs, several centuries before his time. However, for unknown reasons, he was not as reputable, or perhaps not as fortunate, as his ancestors.

As far as we know, there is only one manuscript of this book in Leningrad, copied in 551 AH=1156 CE, less than one hundred years after the author’s death. The Cairo copy is a handwritten copy of the Leningrad copy that was brought by the late Max Meyerhof in 1930. We are grateful to the Cairo National Library for providing us with a microfilm of the manuscript and regret not being able to obtain a copy of the Leningrad manuscript despite all the efforts made.

1- A bilingual (Arabic-English) list of the simple medications with the references.

2- The second appendix contains a list of the compounded medications classified according to their pharmacological shape (Kuhl, ointment, powder etc.)

3- In the third appendix, we listed in alphabetical order all the medical terms in Arabic with their English translations.

4- In this fourth appendix, we listed the English medical terms with the Arabic translations.

5- In the fifth appendix, we put a collection of fifteen anatomical illustrations with the Arabic names of each part, with emphasis on the ocular anatomical names.

Although the author did not add anything new or original in his book, he studied the anatomy of the eye and its adnexa very carefully and with reasonable details. In addition to that, he wrote extensively about the simple and compounded medications. Occasionally, the author confuses the reader by describing the diseases of some parts of the eye, e.g. the lens, and suddenly changes the discussion to the cornea or the vitreous diseases and then again to the diseases of the lens (page 12 of the manuscript).  In addition, the author failed to mention the treatment of the aqueous humor, the lens, the vitreous and the visual spirit, and he failed to mention the diseases of the optic nerve and the retina, the choroid and the extraocular muscles. This could be because he wanted to remain focused on the topic of the title, Anatomy of the Eye. The most notable thing about the author is that he emphasized preventing the general practitioner from performing any eye surgery unless he had spent enough time with an expert oculist as an observer or an assistant, and he had practiced on animal eyes to gain enough experience and skill in the field.

In conclusion, we admit that this book does not rise to the level of any other books on ophthalmology written by his contemporaries, but it certainly was the first book in the history of mankind dedicated to the anatomy of the eye and its adnexa.  The book was edited by: Mahmoud Ahmad Saqr,  M. Rawwas Qalaaji, and  M. Zafer Wafai. It was published by: Al-Obeikan Publishing House, Riyadh, Saudi Arabia. 1991. 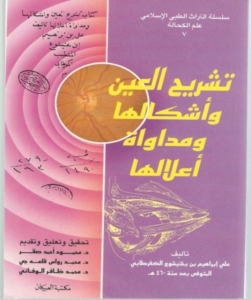